Beginnings: Gateway to the West

Located in the northwest corner of Louisiana, Caddo Parish has a unique history reflecting its beginnings as “The Gateway to the West". Click on our seal shown to the right to learn about meaning behind it's design.

Today, the Parish of Caddo covers 852 square miles with its borders being, Texas to the west, Arkansas to the north, the Red River to the east, and DeSoto Parish to the south, with a small section at the southeastern corner adjoining Red River Parish. 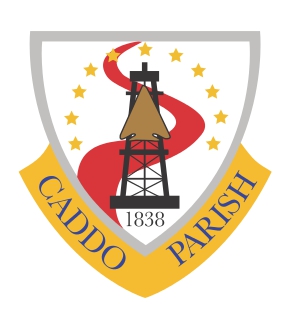 The parish contains 11 municipalities, each of which adds its own local color to the spectrum of delights that Caddo Parish has to offer:

The largest metropolitan area within the Parish is the City of Shreveport, which serves as the Parish seat.

The Caddo Indians, a tribe of Native Americans, were the original inhabitants of northwest Louisiana. The Caddo Indian Confederacy consisted of six tribes who would eventually sell their lands to the United States by signing the Treaty of Cession of 1835. The Caddo's had enjoyed seclusion from white settlers because the “Great Raft” prevented early exploration of the Upper Red River Valley.

Shreve Town Company was formed on May 27, 1836, as a real estate brokerage firm. The owners of this company would be the founding fathers of Shreveport. The City of Shreveport became an incorporated township in 1839. Shreveport is named for Captain Henry Miller Shreve to honor his contribution to the settlement of the region. Shreveport was named the seat of Parish government on October 6, 1840.

During the Civil War, Shreveport would serve as the capitol of Louisiana when Baton Rouge fell to Union forces. The last surrender of Confederate forces occurred here on June 6, 1865. Following the economic depression of the Civil War era, Caddo Parish found renewed prosperity with the oil boom of the early 1900s. Oil derricks dotting the countryside of north Caddo Parish serve as a reminder of the thriving oil well drilling industry that gave rise to communities such as Oil City and the Caddo Lake region of Louisiana. This “black gold” prosperity lasted from around 1904 to 1914.

Building a Strong Economic Base Today

Today, the focus of the leaders of Caddo Parish is the establishment of a strong economy based on the attraction of expanding commercial and industrial entities. Our leaders also place strong emphasis on featuring Shreveport as a great tourist destination.

Thanks for Your Visit!

We thank you for your interest in Caddo Parish and hope that you will remember us as you plan your next vacation. The citizens of Shreveport and the surrounding area would welcome your visit.