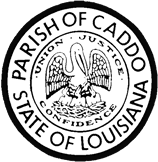 The Caddo Parish Commission (the "Commission") is the governing authority for the Parish of Caddo and is a political subdivision of the State of Louisiana. The Commission consists of twelve members called commissioners who are elected to four-year terms from single member districts.

The Commission, under the provisions of Louisiana Revised Statutes 33:1271-1285, enacts ordinances, sets policy and establishes programs in such fields as criminal and juvenile justice, highways and streets, sanitation, planning and zoning, public health and welfare, libraries, culture and recreational facilities, economic development and general administrative services.

The Commission was established December 10, 1984 after voter approval of the Home Rule Charter for Caddo Parish on April 7, 1984. The Commission replaced the Caddo Parish Police Jury which was established January 18, 1838. Under the Home Rule Charter form of government, an elected commission serves as the legislative branch and the Parish Administrator is the chief executive officer and head of the executive branch of the parish government.